What Is Crossover Toe?

that can occur at any age, although it is most often seen in adults. Some people confuse crossover toe with a hammertoe, probably because both conditions involve a toe that does not lie in the

normal position. However, crossover toe is entirely different from a hammertoe—and much more complex. Symptoms of Crossover Toe Although the crossing over of the toe usually occurs over a

period of time, it can appear more quickly if caused by injury or overuse. Symptoms may include:

It is generally believed that crossover toe is a result of abnormal foot mechanics, where the ball of the foot beneath the second toe joint takes an excessive amount of weight-bearing pressure. This pressure eventually leads to weakening of the supportive ligaments and a failure of the joint to stabilize the toe,resulting in the toe crossing over. Certain conditions or characteristics can make a person prone to experiencing excessive pressure on the ball of the foot. These most commonly include a severe bunion deformity, a second toe longer than the big toe, an arch that is structurally unstable, and a tight calf muscle. Diagnosis Crossover toe is sometimes misdiagnosed, especially in the early stages when there is pain but the toe has not yet crossed over. The pain experienced in crossover toe mimics a condition called Morton’s neuroma. The two disorders, however, are treated very differently— making it crucial to obtain an accurate diagnosis. In arriving at a diagnosis, the foot and ankle surgeon will examine the foot, press on it, and maneuver it to reproduce the symptoms.The surgeon will also look for potential causes and test the stability of the joint. X-rays are usually ordered, and other imaging studies are sometimes needed.

Non-surgical Approaches The best time to treat crossover toe is in the early stages, before the toe starts to drift toward the big toe. At that time, non-surgical approaches can be used to stabilize the joint, reduce the symptoms, and address the underlying cause of the condition. The foot and ankle surgeon may select one or more of the following options for early treatment of crossover toe:

Rest and ice. Staying off the foot and applying ice packs help reduce the swelling and pain. Apply a bag of ice over a thin towel to the affected area for 20 minutes of each waking hour. Do not put ice directly against the skin.

When Is Surgery Needed?

Once the second toe starts moving toward the big toe, it will never go back to its normal position unless surgery is performed. The foot and ankle surgeon will select the procedure or combination of procedures best suited to the individual patient. 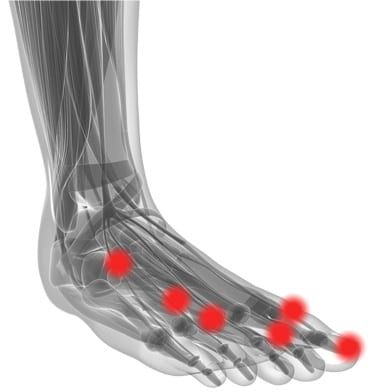